What will the new Renewable Electricity Support Scheme (RESS) mean for the Irish renewable energy sector? 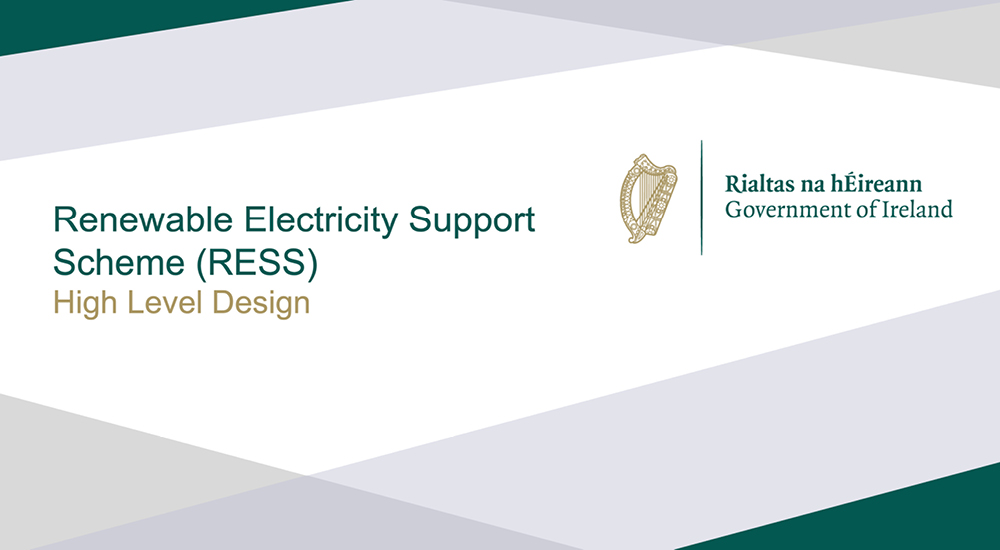 Earlier this week, the government announced details of the first Renewable Electricity Support Scheme (RESS) auction. Our Head of Legal, Ronan O'Grady, reflects on what this means for Ireland's renewable energy sector.

The Minister for Communications, Climate Action and Environment, Richard Bruton, T.D. today (Monday, 2 December 2019) announced details of the first Renewable Electricity Support Scheme (RESS) auction which has received Government approval. The RESS brings Ireland into line with other countries by moving away from a fixed subsidy (as was the case under the previous REFIT scheme) for renewable energy generators to a competitive auction approach. The RESS scheme is ultimately underpinned by agreement between the EU Commission, EU Parliament and EU Council (as agreed by the revised renewable energy directive 2018/2001/EU (RED II) which entered into force in December 2018) to set a binding energy target of 32%, a target for which Ireland will need to contribute in the form of a national renewable share of circa 24-26% by 2030. The scheme is critical to achieving the (70x30) goal of 70% of Irish electricity from renewables (RES-E) by 2030 (currently at circa 35%), a key element of the Government’s climate action plan. In order to hit our 2030 targets, it is estimated that a 2030 RES-E generation (total) range of between 5,660MW to 12,140MW is required, depending on a number of variables. The first RESS auction is set to open early next year, subject to State Aid approval and will deliver up to a 3,000GWh increase in renewable electricity generation by the end of 2022.

Awarded projects will be offered an Implementation Agreement that states the project will receive a letter of offer (LoO) which enables it to execute an eligible PPA and commit the project to be developed in return for the offer of support. An on-demand bond will be required as performance security to the value of €25,000/ MW. Mitigation is included to encourage the achievement of milestones. DCCAE may charge up to 25% of the project security if milestones are not achieved or retain the right of remedy to rescind the LoO.

Milestones to be achieved

The frequency of future RESS auctions is dependent on the renewable electricity project supply pipeline which has not yet been baselined. It is envisaged that a minimum of four auctions will occur between 2020 and 2027 to deliver on the 2030 targets. This will provide pathways for renewable developers, including offshore wind projects, as it sets out the indicative timelines and volumes for auctions over the coming decade and provides clarity for developers in relation to when they need to have their projects 'auction ready'. It will also allow Ireland to take advantage of new technologies as they emerge and adapt future RESS auctions to reflect the experience and lessons from RESS-1.

Poyry, a consulting and advisory services firm, in a report released in October 2019, contends that building a significant amount of CfD supported renewables in the ISEM could bring significant value to consumers. If the RESS CfD strike price comes in at 60/MWh over the 15 year period from 2025-2040 (and if sufficient capacity were built to take in renewables penetration to 70% across ISEM) consumers in both NI and ROI could benefit by around €2.5 billion on the basis that the reduced wholesale price of electricity (due to higher levels of near-zero marginal cost renewables on the grid) (the "Wholesale Price Saving") would offset the cost of providing stability to CFD-supported generators (the "Stabilisation Cost"). However, the corollary of the Whole Sale Price Saving is that it could make the economics of Corporate PPA's more challenging, as the lower fixed prices sought by corporates for these electricity "hedging" contracts may not be viable for generators to support. This may be a headwind for the CPPA market, making the Government target of 15% renewables from CPPA's more difficult to achieve without some form of policy incentives, such as (i) tax credits, (ii) an offtaker of last resort guarantee scheme, or (iii) obligations on demand customers to purchase electricity contracted under CPPAs).

The approval of the scheme is welcome news for the Irish renewables sector and comes some 16 months after the Government first approved the high-level design of this new support scheme. However, there is likely to be a gap of 18 months between the completion of the last wind farms under the old REFIT support scheme and the connection of new projects under the RESS which obviously highlights the lost opportunity for developers, funders and stakeholders in Ireland in deploying additional renewable capacity over that period. Such additional capacity would have greatly assisted our chances of achieving our 2020 RES-E targets, which are now likely to be missed. Further industry concerns remain in relation to certain key issues such as wind energy development guidelines, contestable cabling landownership, curtailment, and uncertainty on local authority rates. Today's belated announcement also begs the question, why such a long delay in finalising the RESS design? The Government has been acutely aware of the impact of missing our 2020 targets and yet it appears to be sleeping walking into the (very soon to be real) imposition of hundreds of millions of euros of annual fines for its failure to deliver on our legally binding RES commitments. There does not appear to be any meaningful evidence in the scheme details which were released yesterday which would give support to the argument that such a long period of delay (since July 2018) was necessary for finalising the design. Once again, it is clear that until there is greater joined-up thinking and urgency demonstrated by all the various arms of the Government involved in the delivery of these massively capital intensive projects, significant challenges will remain in delivering on our 2030 commitments, notwithstanding today's positive news which although belated, was a fundamental step in the process and one which brings further clarity on the route to market for the sector. A five-week consultation is now scheduled for mid-December 2019 in order to finalise the terms and conditions of the design and final state aid approval is expected by February 2020.

A further positive development delivered by CRU on 29 November 2019 was the release of the ECP-2 - proposed decision, which is hugely significant in allocating which renewables projects will be built in Ireland between 2022 and 2030.