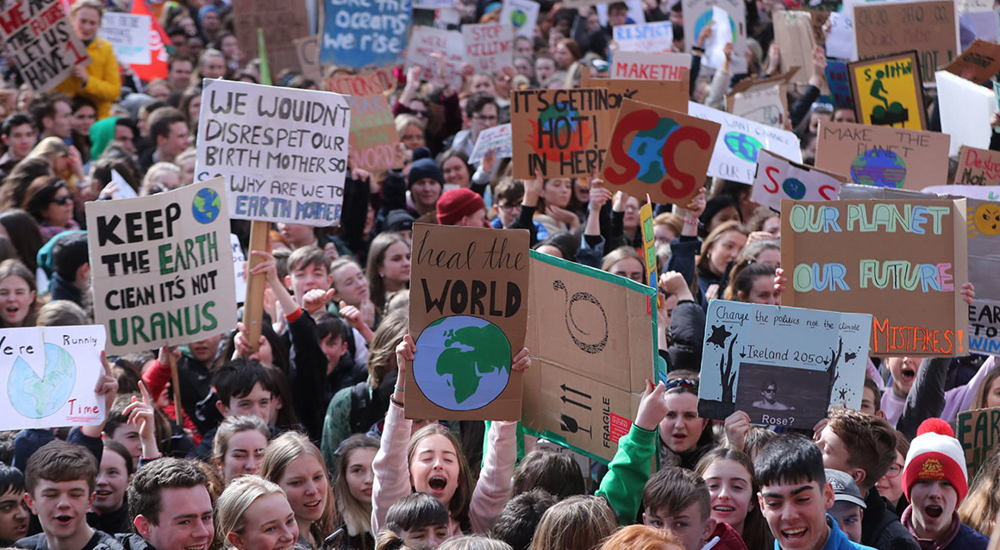 Last week, more than 11,000 young people took to the streets of Dublin as part of the global Climate strike. Our Senior Investment Analyst, Brian Tiernan, was among them. Here, he recalls an important moment in the struggle for action on climate change.Friday the 15th March saw the biggest global gathering of young people. 1.5 million of them went on strike from school in protest of adults’ failure to take climate change seriously. This was all started by a 16-year-old Swedish girl, Greta Thunberg. Since starting her protest outside the Swedish parliament in August 2018, she has since spoken at the UN, the EU, the World Economic Forum and she’s given a TED talk. She has inspired a generation to get mobilised behind the biggest issue of our time.The sheer numbers participating should not be dismissed as an easy day off school for the kids or acting up. Failure to engage with this movement will leave every political leader behind.The strike was not politically driven. It transcends politics and impacts the very survival of the human race. The facts are clear, the solutions are clear, the timeline is clear, the only thing missing is action.I was both inspired and humbled to take part in the climate march on Friday. I felt like I was almost encroaching on this new generation’s stand against the biggest existential risk facing the planet. This feeling was shared by the climate change “influencers” I follow on social media. These dedicated but haggard climate activists stood back in awe of approx. 11,000 students hitting the streets to ask the Irish government to do its bit on this issue.[gallery size="large" columns="1" ids="http://solar21.ie/wp-content/uploads/2019/03/Climate-change-strike-March-2019_2.jpg|Dublin's Climate protest 2019,http://solar21.ie/wp-content/uploads/2019/03/Climate-change-strike-March-2019_3.jpg|,http://solar21.ie/wp-content/uploads/2019/03/Climate-change-strike-March-2019_4.jpg|,http://solar21.ie/wp-content/uploads/2019/03/Climate-change-strike-March-2019_5.jpg|" orderby="rand"]